The only things certain in life are death, taxes, and your technology stack will change over time. While architectural changes are complicated in their own right, the challenges are even greater when your primary data store is changing to a fundamentally different technology.

A recent project involved migrating applications from a legacy architecture based on Java/Hibernate/Oracle to a new architecture based on Ruby/MongoMapper/MongoDB. In order to facilitate the transition from Oracle to MongoDB, we needed a temporary ETL solution to migrate data from Oracle to MongoDB. A new domain model and document structure had been designed and developed for MongoDB with Ruby/MongoMapper, and there were existing Java/Hibernate entities mapped to Oracle.

Rather than having to re-map one database or the other in the other persistence technology to facilitate the ETL process (not DRY), JRuby allowed the two persistence technologies to interoperate. By utilizing JRuby’s powerful embedding capabilities, we were able to read data out of Oracle via Hibernate and write data to MongoDB via MongoMapper.

A Blog contains many Posts, and a Post contains many Comments. Users create Posts and Comments. The relational model for this domain model would look something like this: 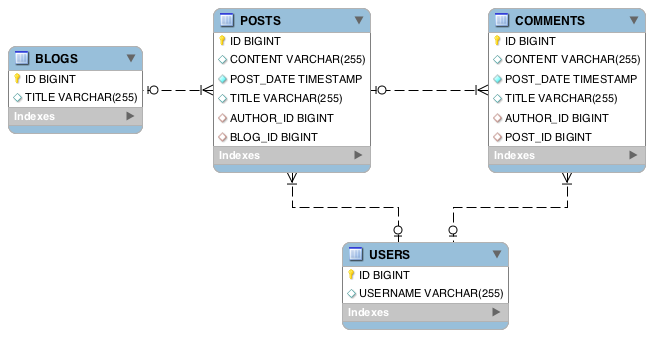 The schema is highly normalized. Entities live in their own tables, and are tied together via foreign keys.

With document databases like MongoDB, you typically want to denormalize data according to your access patterns, as you can’t rely on joins. In our example blog domain model, storing posts and comments in separate collections would result in unnecessary querying. Thus, these will become embedded collections within their respective parent documents, and our resulting Blog MongoDB document would look something like this:

Translator classes are Ruby classes which translate Java/Hibernate objects to their Ruby/MongoMapper counterparts, and contain the logic for dealing with denormalization.

Let’s look at an example. The Hibernate domain model class for Blog would look something like this:

The BlogTranslator class contains the logic to translate Blog entities to Blog documents:

Some things to note:

A complete RDBMS -> MongoDB ETL application for our blog domain model can be found here:

The java directory contains the Hibernate domain model mapped to the relational database, as well as the example ETLManager class which demonstrates JRuby’s embedding capability.

The ruby directory is a RubyGem containing the MongoMapper domain model mapped to MongoDB, as well as the Translator classes.

To run this project the following are required:

For simplicity, this example application uses HSQLDB for the RDBMS, so there is no need to have a separate RDBMS installed/running. You can obviously change the Spring/Hibernate configuration to use your RDBMS of choice if you so desire.

Clone the jruby-etl git repository and run the following to compile the Java source files and create the distribution:

cd to the distribution directory and load the example seed data into the relational database.

Finally, run the ETL app to translate the seed data from the relational database to MongoDB.

The project is configured to log all SQL statements and all MongoDB queries so that you can see the translation happening.

This ETL application is just one example of how JRuby can help facilitate bridging Java and Ruby based technologies. What interesting solutions are you building with JRuby?